Home / About blacksmith / About Gatis Pipkalejs 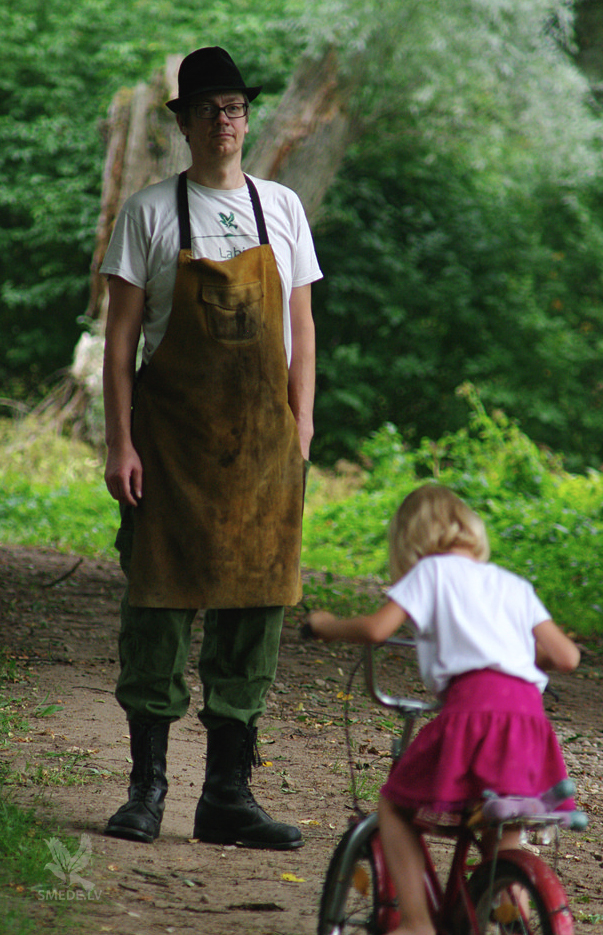 Gatis Pīpkalējs is a blacksmith and multimedia artist from Salacgrīva district the county Latvia, and mostly specializes in Forging in various events where to lay it is useful for a mobile fence and its equipment (ankles, forge stings, canopy, fork screwdriver, etc.). The smith has a pot of nails both corporate events and offered forging at festivals (for example, GOOD NATURE), and forging specific forgery at different city holidays or events (for example, visitors to the fish on the day of the Salacgriva Nightshade eels). Gatis not only goes to some measure, but also accepts to himself smoke visitors in Salacgriva district. Mostly they are related to the wedding organizing or student excursions. Somebody also comes in at the blacksmith passerby tourist. They are mostly blamed for small forms and their own fictional items and works of art. Blacksmith Gatis graduated from Riga Craft Secondary School (RAV) in 1997 metal processing department. It captures both the skills of the blacksmith and the drawing skills and the basics of the composition. The most visible members of the school who continue forging a post, mention Kārlis Zvans un Aigars Grīnbergs. Of the younger or older, the best known are Oskars Vincevičs, Edgars Čeksters, Krišs Dubrovskis. In parallel to the studies the young smith practiced a post at the various blacksmith’s workshops (Guntis Jakubovskis, Gunārs Andersons, Āris Alsiņš). But in the last school year he even became the assistant master of the Craft Secondary School. After graduating from school Gatis was acquired Zeļļa diploma at the Latvian Chamber of Crafts.
Before high school Gatis had the opportunity to work as a turner (II Category) at the Riga Radio Plant (1990 – 1991) but in 1993 also Ltd. “Daiļrade Riga” was working metalworker Miervaldis Zibens before. The most prominent place to mention in the nineties of the Ethnographic Open-Air Museum in the blacksmith studio “Auseklis” at the master Vilnis Vincevčs . The museum acquired the marketing experience and discovered the new brothers of blacsmith(Ģirts Bērziņš, Ervīns Zonne, Ģirts Burvis, Mārtiņš Daksis, Maksims Butorins, Gatis Staprēns). During the school as well as at studio “Auseklis” a metal artist also participated in metal art and forging exhibitions. The brightest of them is solo exhibition “Kill the Prejudice” (Nogalināt aizspriedumu) at the G.Skilter Memorial Museum in Riga, Latvia in 1998 and participation in the Folk Applied Art Exhibition “Metal and jewelry” in the Latvian Museum of Fine Arts in Velvet Hall in Riga at the same time per year. Emil Melngail’s Folk Art Center awarded second place wrought iron group.

From 2000 – 2007 Gatis Pīpkalējs studied at the Latvian Academy of Arts (Master’s Degree) and participates in art exhibitions with graphic, video and web works. Participated exhibitions as “Autumn” (Rudens) and “Art Days” (Mākslas dienas. During this time he works mainly in IT companies for graphic designers, web design or website designers and homepage design teacher.

2016 was the year of Forgings return. Before it was moving from Riga to Salacgriva district, and was founded in 2014 company Ltd. excellent recreation company “DUDU nest” (DUDU ligzdas) with the aim the region is engaged in tourism business. Basic business is tree house and bike rental but the blade fence was right here, where visitors could themselves scrape an iron object with your own hands. Mostly people would it is suggested to blame forged nails or scrape a copper coin. So it was refreshed skills and started setting up a blacksmith.

In 2016 on the “Day of the lamprey” (Nēģu diena) in Salacgriva, despite the extremely expressive autumn rain and wind, Blacksmith Gatis Pīpkalējs managed a 6-hour blacksmith workshop. Visitors were surprised at this opportunity, everybody wanted to check the weight of the hammer, to demonstrate a rhythmic attempt to iron. Thanks to blacksmith Gatis for the cooperation – the outing lesson was interesting for both children and parents, and it is great that such an activity is possible in any place where the festival is planned!

Thank Gatis for kind and professional attitude with providing minting coins. For our event coin master Gatis quickly created a special coin design and helped more than 320 people minting out this commemorative gift in 4 hours. Communication with Gati is very fast, easy and pleasant. We will definitely continue to work together.

We had a surprise that Gatis was forging iron! We are known for more than ten years. Him takes care of our homepage and we know him as a website developer. Since we are organizers of the international music festival LABA DABA (GOOD NATURE). We invite Gatis to entertain festival visitors with mobile blacksmith’s fire. At the blacksmith’s shelter there was always a movement that testified about the fact that people are interesting. Thanks the artist for joyous approach!

You can find out more about which cookies we are using or switch them off in settings.

This website uses cookies so that we can provide you with the best user experience possible. Cookie information is stored in your browser and performs functions such as recognising you when you return to our website and helping our team to understand which sections of the website you find most interesting and useful.

Strictly Necessary Cookie should be enabled at all times so that we can save your preferences for cookie settings.

If you disable this cookie, we will not be able to save your preferences. This means that every time you visit this website you will need to enable or disable cookies again.